It’s was an excessively hot day in Chennai. I don’t even recall my reason
for being in the city because I honestly try avoiding it. It’s a very dirty and congested place. It’s packed with people stepping on each other to make their way. I think the temp was above definitely over 100 degrees as I moved down the street. Out of the corner of my eye i saw two of the dirtiest kids I’ve even seen. They were hustling to make money to eat. Now as sad as it is street orphans are a dime a dozen, there just is so many it’s almost disheartening
to try and help one because if you help one you trip over ten more
struggling to survive.

Now when I say street orphan I don’t mean your average junky type kid on the streets of Pittsburgh who is well fed and trying to bum cash for a hit. I mean the kind that is a child between 6-10 who is so malnourished that his bones are coming through his skin and whose hair is falling out. He is the kid on the Save The Children infomercial, except you can’t flip the channel to avoid him. Being a white man aka walking light bulb you can count on being asked for cash. As soon as i was noticed the boys they scurried over to me. 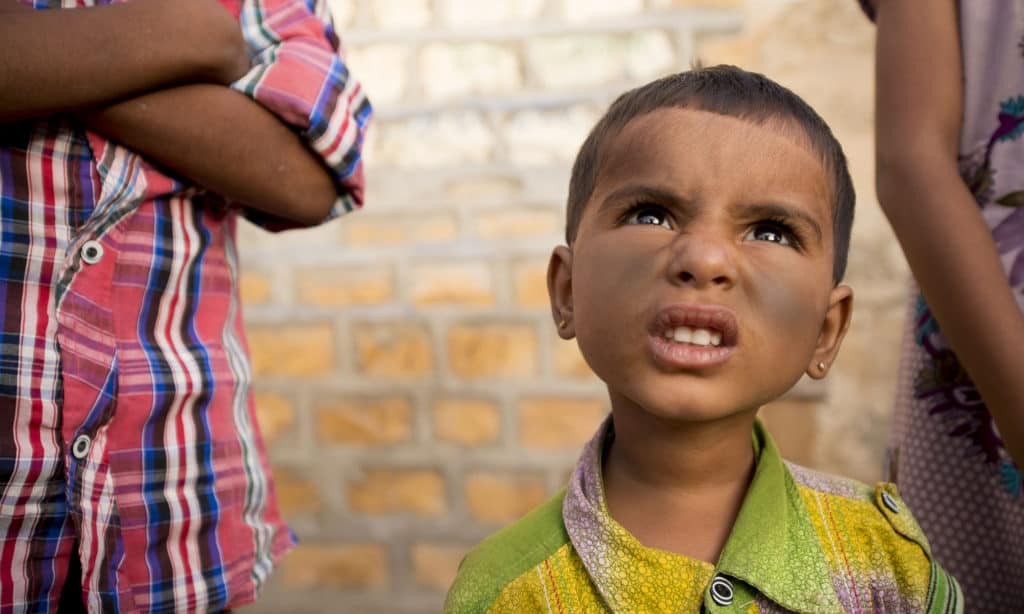 Their clothes were saturated with dirt, their faces and hair as well. Their teeth showed signs of never being graced by a toothbrush. The small one spoke first “anna coss kudunga” Big brother give money please. About 100 ft behind us I noticed a pizza place. I asked you guys like pizza, (But in Tamil). Neither knew what i was talking about so i said come. I opened the door to a nice fancy air conditioned restaurant with big screen TV’s and the smell of perfectly cooked Italian food. Their little bodies stood next to me as all eyes turned to stare us down hoping to find a logical reason for why these two creatures that most people had mistaken as parasites had just disrupted their lunch. I was used to people starring at my excessively white skin so i wasn’t phased, but i could tell the boys felt as if they had done something wrong.

They timidly peered out at the sites waiting to be ushered back into the heat. I walked up to the counter and the waiter looked slightly upset and distracted by the two thin bodies hanging from my arms. In my indignation I thought I dare you to say something to me about these boys because i promise you will not enjoy my response. I asked for a menu, turned to the page with the largest pizza. I turned showed the boys the pizza, “do you want this?” Their eyes lit up and searched my faced to see if i was in some way deceiving them. Their faces brightened and I gave the word, I want this”.

The waiter said yes sir. I paid the bill and we made our way to the a massive comfortable booth. They looked like two ants sitting on a hotdog bun. As the pizza came I stood and dismissed myself. Drawing the waiter to myself I said “you take care of them for me”. Certainly sir. I returned to the hot street and thought about God’s grace. Maybe for the first and last time in their lives the two boys whose names i never even asked tasted grace. I imagine them feeling like kings sitting in the booth dripping sauce down their chin with not a care in the world.

One day a friend from the other side of the country brought me a gift from his mother. In a small bag she had packed a series of random goodies. In the bottom of the bag I noticed a little jar called Nutella. I had heard of it but never had the desire to spend 4 dollars to taste it. I opened the jar and tasted it with the end of my pen. “Wow no wonder this crap is four bucks it’s awesome” I was tempted to eat myself into a sugar-induced coma. The next day i had about six of the neighborhood children in my hut/house touching everything which is the custom of children. Sowmiya picked up the nutella “ennathi, what is this”? I lifted the lid and let her stick her finger into the jar. She shamelessly stuck her all of her fingers into the chocolaty goop. Her eyes opened wider then I’d ever seen, mmmmmm. Instantly all the kids circled around.

All were hoping for their chance to taste. Now i could be a parent and make it all orderly but I decided to let the kids have a lavished portion of Grace Nutella. One after another they started sticking their entire hand into the chocolate. You can imagine the chocolaty mess. They all had drips of chocolate on the dresses and shirts. Their already dirty faces were seasoned with chocolate stains. I’m confident none of these children will ever taste anything so tasty again but isn’t that grace to have some thing unexpected that you didn’t earn.